The joy of playing music together can multiply the musical experience of even the youngest students. Our ensembles regularly perform at events of the school and of the town, where the audience can also partake of this gift. Playing music together is extremely effective in both individual development and being part of a community. ‘If diversity finds a common ground and goal, it may give birth to great things. Everyone preserves their differences – but works towards the same goal. This is the way of development in every stage of life.’ (Péter Müller) Friendships can be made within the walls of the music school which may stay with the students for life. 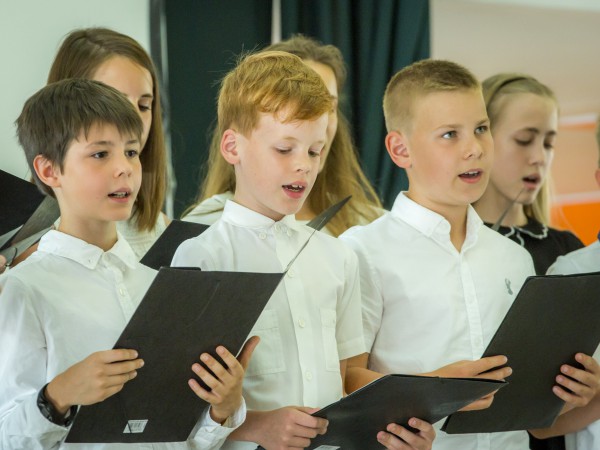 ‘Whoever starts life with music, their every activity will be brightened by her later, and they are given a treasure of life which sees them through a lot of troubles. Music is a nourishing and comforting elixir, and multiples life’s beauties and all that is valuable therein.’ Zoltán Kodály

One of the most important goals of the music school is to help children get to like singing, and be raised adults who sing regularly. Even the youngest are given the opportunity, by performing in small choirs – as part of their curriculum in solfège –, to raise the splendor of the programmes at the music school and give happiness to their parents and other members of the audience.

In 2018, Boglárka Berkesi formed a quality sounding choir from her groups of solfège at Mindszenty School. They prepare for the performances (Charity concert – Mindszenty, Advent concert, closing ceremony) in the solfège classes and extra rehearsals.

The Girls’ choir is almost as old as the school itself; it has been directed by Mrs. Óhidi since the academic year of 2018/2019. Rehearsals are on Wednesdays in 90 minutes (4.30 – 6 pm). Studens with a clear voice who have passed their base exam of solfège and like singing together are sought in the choir. The repertoire of the choir is constantly being extended with pieces that the students like.

‘In the millennial year, the music school of Budaörs together with the Countess Zsuzsanna Bercsényi Town Library initiated to celebrate the Vespers on St. Martin’s day (11th Nov) in Latin; the office has been celebrated ever since in the catholic church in honour of the medieval patron saint of the town and its church.’ Mrs. Kecskés

Mrs. Kecskés meets the boys’ choir once a week. The choir, which earlier convened to sing the Vespers, has extended their repertoire with other pieces, thus, at the Advent concert, they enrich the programme with Nativity songs. Members of the boys’ choir are provided the opportunity to study solfège together as a community, taught to them also by Mrs. Kecskés 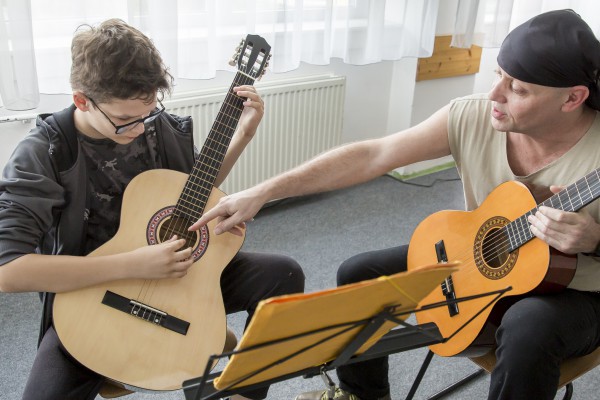 The guitar ensemble – the youngest one in the school – has grown out of the different chamber music formations of the guitar under Zsolt Sági’s direction almost unawares. Rehearsals are on Tuesdays, still in very diverse arrangements and with a diverse repertoire. The guitar ensemble gifts the audience with their performance within and outside the school (eg. in libraries, kindergartens, community centres, or at exhibitions).

The recorder ensemble, where the whole family of the instrument – soprano, alto, tenor, and bass recorders – is represented, was formed in 2002. In the repertoire of the ensemble, beside Rennaissance and Baroque pieces, works by 20th century composers and transcriptions are also found. They perform at events of both the school and the town (in kindergartens, schools, churches). 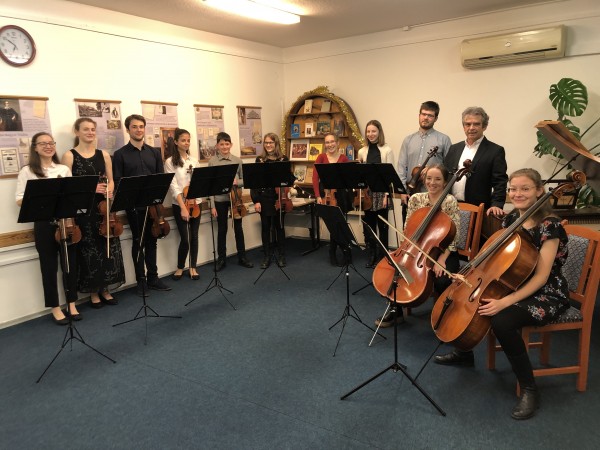 The string orchestra of the school has been playing since 2001. They are presently taught by László Bogáti and Krisztina Baksa on Wednesdays, in 90 minutes (6 – 7.30 pm). Students can become members of the orchestra after having completed their solfège studies, this is the time by which they have achieved such degree of professional mastery that is required in the orchestra. Younger students – together with solfège – are also provided the joy of playing music together in different chamber music formations arranged by their teachers. These chamber music productions can be heard at Students’ concerts, Departmental examination concerts, and the Chamber Music Festival. The string orchestra shows what they know at the Advent concert and the closing ceremony.

The orchestra has been operating at the school since 1997. Currently, József Szász and Ádám Boros tend to the students on Wednesdays in one and a half hours (5.30 – 7 pm). In the past years, the numbers of the orchestra have grown significantly. József Szász, the director of the orchestra, teaches a diverse repertoire to the ensemble from works by old masters to film music and arrangements of popular pieces. The orchestra enriches the programme of the Advent concert and the the closing ceremony of the academic year with their performance.

To ensure the refilling of the ranks of the Town Wind Orchestra, that is, the ‘Wind Club of Budaörs’, collaboration between the two ensembles has begun. Higher year students play in both ensembles, thus the joy of regularly playing music together can go with the students long after finishing school. The last experience together was the trip to and performance in Bretzfeld, the sister town of Budaörs, in 2019.